At the beginning of the spring trekking season, I decided to head off to the Annapurna Base Camp. The trip began in late February, with a bus ride to Pokhara. I decided to take a different route from the normal trek up to Chhomrong via Ghandruk or Ghorepani, instead going through the villages of Koramukh and Lwang. So, upon reaching Pokhara, I changed buses and headed to Koramukh, a small village about 20km to the north west of Pokhara.

From Koramukh, the trail of stone steps went right through the forest to the top of a hill above the village. A walk of about another an hour took me to the beautiful village of Lwang, with home-stays instead of lodges.

The next morning, a long walk waited for me at the break of dawn: the trek from Lwang to Landruk. Following the lesser-trodden route is usually fun, you will have the trail to yourself. The path descends up right from Lwang and continues uphill for a long time. After about thirty minutes from Lwang I reached a beautiful tea garden. From there, the village seemed to be far behind and the trail headed right into the forest. 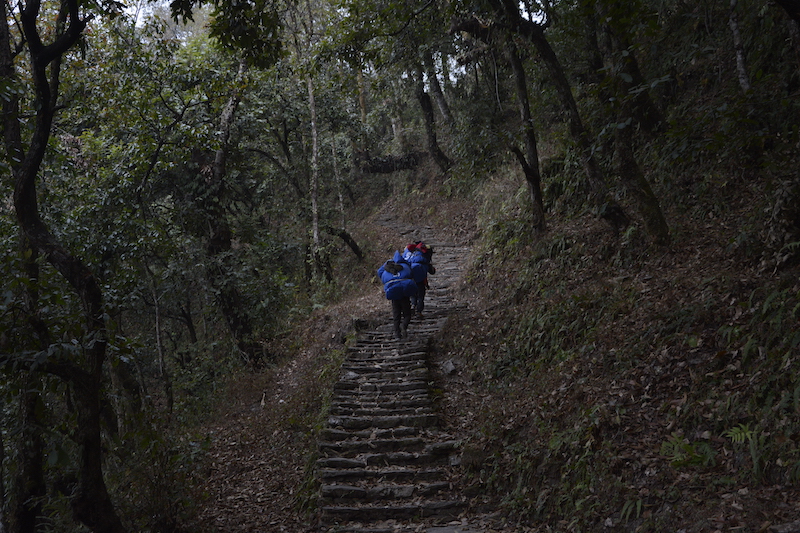 At first, the trail was quite confusing. It was evident that the trail was not that common among trekkers, but the signs on the trees helped a lot. The trek from Lwang to Landruk is a long one, and goes through a forest camp. The trek up to the forest camp is very long and tiring. Hungry and tired, I reached forest camp by afternoon, I was there just two weeks earlier while doing the Mardi Base Camp Trek, and here I was again, heading for a different Base Camp—Annapurna.

A descent of about an hour from the Forest camp took me Landruk, a small village with traditional houses for lodges and tea-houses. The second day ended here for me.

The next morning I woke up early to an amazing view of South Annapurna from the garden of the lodge. I enjoyed the view from the front porch while having breakfast. From Landruk I headed to the new bridge, about a half-hour descent from Landruk. From the new bridge, the trail goes up, steeply at times, to Jhinu Dada.

Upon reaching Jhinu Dada I ordered my lunch, which took about 45 minutes to be prepared, so in the meantime I headed down to the hot-spring, about 10 minutes’ walk away, beside the river. After a long day’s walk, the dip was relaxing. But I still had to eat lunch and climb another hill, so I couldn’t linger there for too long. 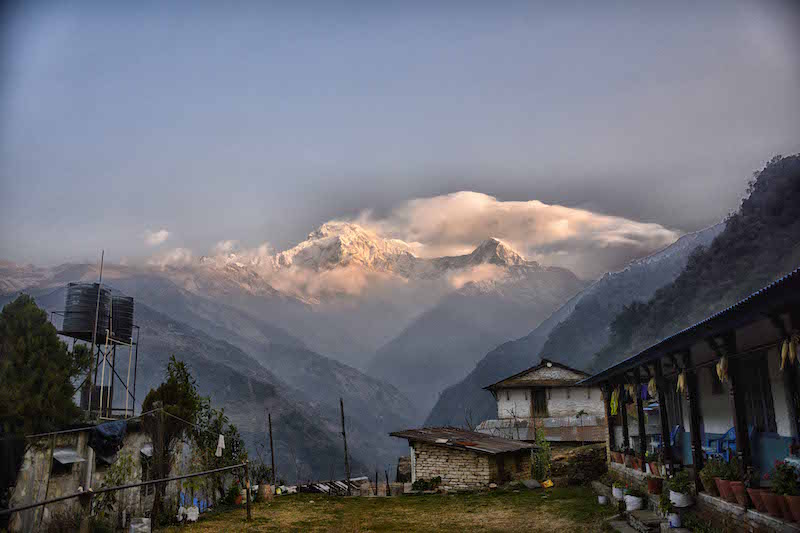 Earlier, when I had been crossing the new bridge, I could see the shiny roofs of the houses of Chhomrong and a tower at the top of the hill. From Jhinu itself, this view was obscured. It wasn’t that far but was a pretty steep climb up to Chhomrong. After about seven hours, I reached Chhomrong, where I ended the third day. Though that evening the view from Chhomrong was concealed by clouds, the next morning the view of the mountains from my window was amazing. I rushed outside to see the massive, majestic Annapurna South, which appeared to be right in front of the village. Machchapuchhre (Fishtail) stood to the left, still hiding behind the dark clouds, which gave way in no time and revealed the mountain.

The fourth day’s trek started at Chhomrong with a short descent to the river. Right after crossing the suspension bridge, the trail headed up hill. After about 45 minutes I reached a place called Sinuwa, which was visible from Chhomorong but looked like match boxes on the middle of the hill. Passing a heard of mules carrying gases cylinders to the tea-houses a few days ahead of me, I continued my journey to Bamboo.

The trails from Sinuwa to Bamboo were fun, just small trails in the forest with beautiful views around. The uphill continued for some time, but almost close to Bamboo the trail goes down for about 10 minutes. At the end of the downhill lies the small settlement of Bamboo, named after the thick Bamboo forest. It started to rain as soon as I reached Bamboo, but I didn’t care enough to take my raincoat out; besides, some lodges were in sight. It took me about six hours to reach Bamboo from Chhomrong. It started raining so I decided to stay at Bamboo, although it was just midday. It was better to stay warm with a cup of tea than walk in the rain. 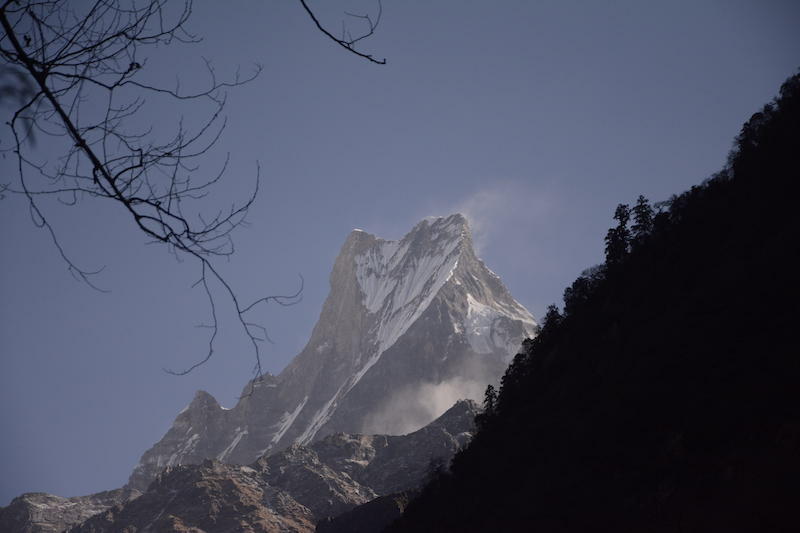 I started early that morning, had a cup of tea and two Gurung breads, a typical breakfast along the route. After breakfast I started my trek, heading to Deurali from Bamboo, a very short hike for a day. As I started my trek I realized that it had been a good decision to stay back at Bamboo. The trail from Bamboo to Dovan would have been pretty slippery to walk in in the rain. It was still slippery. Though the whole area was under the shadow of the clouds the previous night, the morning sky was clear and Mount Machchapuchhre was visible behind the hill in front of Bamboo. After about an hour I reached Dovan. Another hour or so of trekking and I reached Himalaya, where I had my lunch and headed off to Deurali. The trail continued going up, at times steeply, until Deurali.

By 3pm that day I had reached Deurali. Gradually darks clouds covered the sky ahead of me, though it didn’t shower right away. I got myself a room, changed my clothes and went into the kitchen to get a cup of tea. Only when I looked outside did I realize it was raining. A few hours later, it started snowing very heavily, blanketing the ground with 4-5 inches of thick snow. The sky would be clear the next day, but I knew the trails would definitely be slippery. I knew I’d have to make an early start the next morning to avoid the slippery trails, so I had an early night. 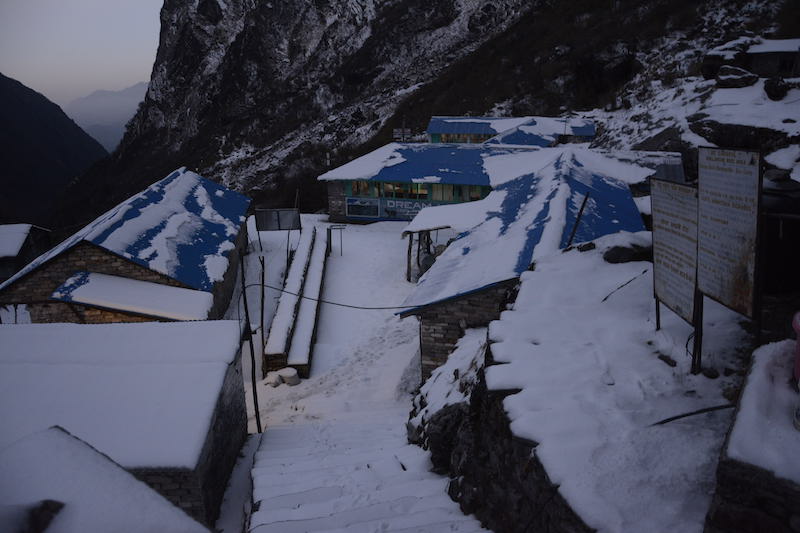 The next morning I woke up very early and started the trek to Annapurna Base Camp. The trails were completely covered with snow, the stone steps were barely visible, and every time I stepped on the ground I could hear the faint sounds of cracking ice. The trail leading up to Annapurna Base Camp was absolutely amazing, with snow-clad hills and mountains all around, and the whole trail laden with snow. 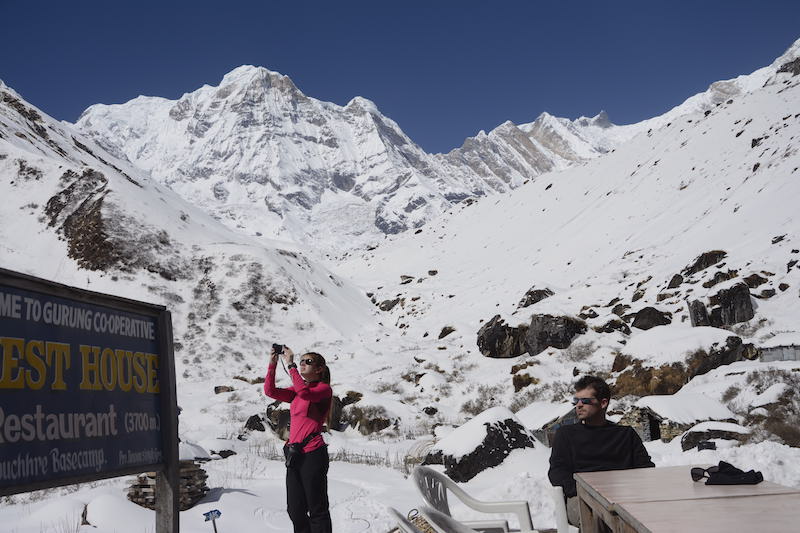 Annapurna III was looming over the landscape at a distance, and Machchapuchhre seemed like it was just a few hundred meters away. Before too long, I reached Machchapuchhre Base Camp. I could see the shinning roofs of the lodges at Base Camp, which was partly covered with snow. From far away it seemed as if the lodges were right below the mountains. The sun was up and it had started to get warmer and warmer. It was getting very hard to look around without sunglasses. I ordered my lunch and looked around the Base Camp, at the panoramic view of snow-clad mountains all around. A quick bask in the sun was enough rest for the two hours of trekking I had done that morning. After lunch it was time to head to the final destination of the trek: Annapurna Base Camp. 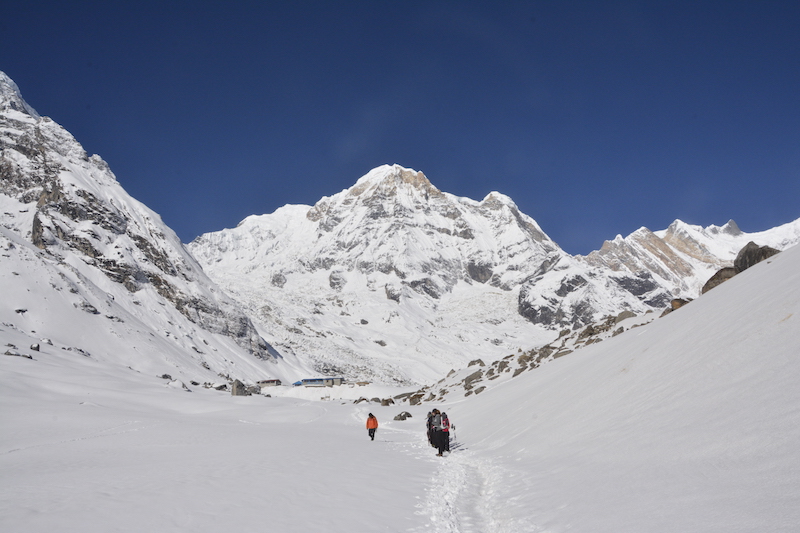 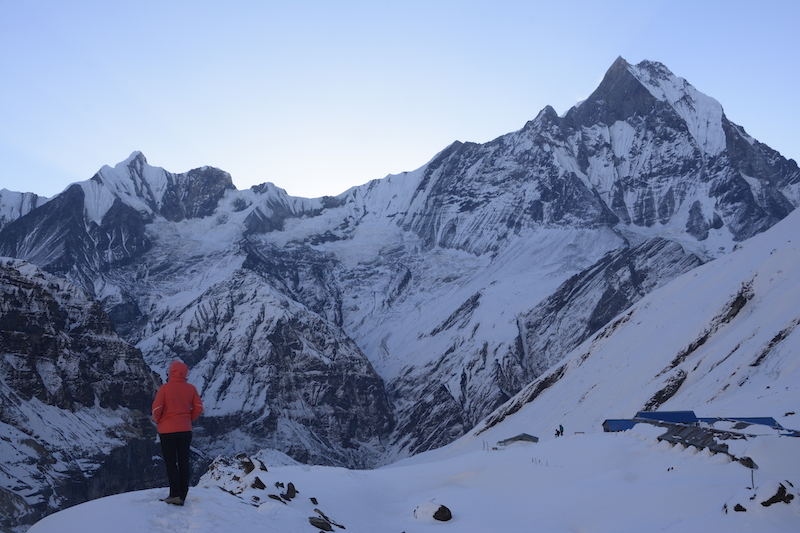 After getting fresh, I ordered tea, then headed outside to take some photos. Around sunset, the whole area glowed gold. It looked majestic, but with the sunset came the chilling cold wind, which meant that I had to go inside my room.

The next morning, I woke up at 5:30 am, but as it was pretty cold and dark outside I stayed inside until the sun started to come up, when I headed outside to take photos. The sky was clear, it was very windy and extremely cold. Cracking the fresh ice on the trails, I found a small view point. Before too long the peak of the mountains started glowing, slowly and gradually lighting up the top of the mountains. The view from there was definitely one of the best, almost a 360 degree mountain view. 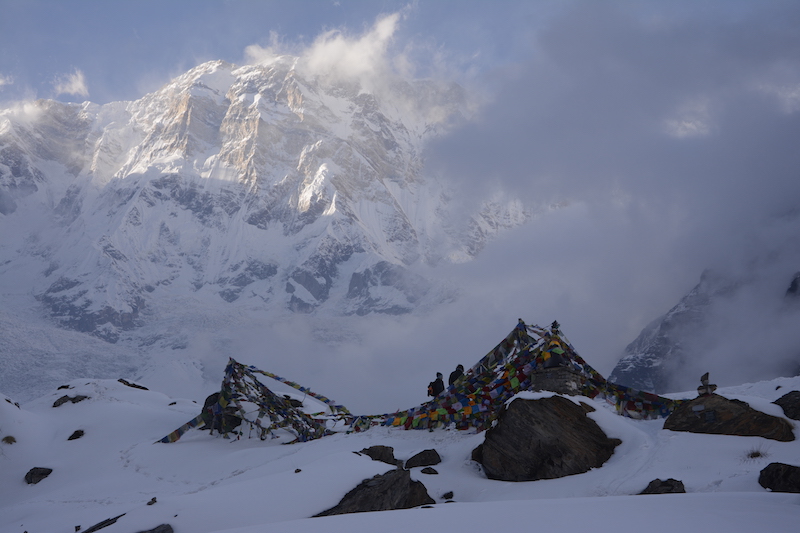 After about two hours there I made my way back to the hotel, packed my bags and started my descent down. The sun was up, it was getting warm and the trail was getting slippery. Some groups had already descended, making the trail even more slippery. Slowly and gradually, at times slipping onto the ground, I made it to Machchapuchhre Base Camp. After a small climb from there and about 30 minutes of downhill, I reached the bank of the river. From there onwards, most of the snow had melted and it was easier to walk.

In no time I had reached Deurali, and almost all of the snow there had melted. I had a cup of hot lemon and continued my trek down to Bamboo. Just like few days ago, I had barely reached Bamboo and it started raining again. I overheard some porters saying that it rains every day in Bamboo.

Back at Bamboo, after many days of Dal Bhat, I was tired of it and I decided to have a pizza instead. I wasn’t expecting it to be as good as those we can get in Kathmandu, but it wasn’t bad at all. It smelled good, and tasted good too.

The next morning I headed for Chhomrong early. Apart from the climb at the start of the trail, the majority was downhill. The only uphill was at the base of Chhomrong, going down to the river from Sinuwa and climbing back up to the top of Chhomrong. By afternoon I was at Chhomrong. No mountains were visible from Chhomrong that day, so I just stayed in my room reading a book and relaxing after my days of trekking. 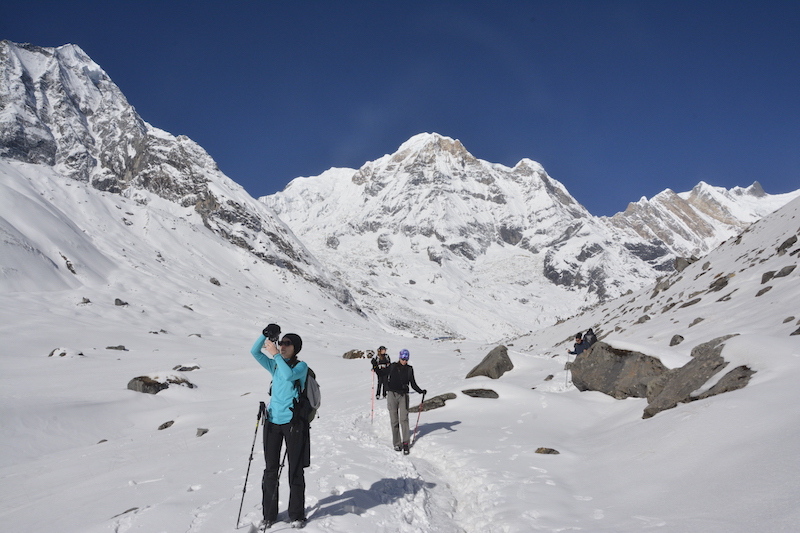 The next morning, almost at the end of my trekking, I was heading to the village of Ghandruk. I had visited that village many times, but this time I headed in a different direction. I took the upper trails and descended down to the Kimrong River and then up to Komrong Dada. From there I knew the trail and it was a very easy descent down to Ghandruk. Covered with clouds, the view was not that good. It looked gloomy and wasn’t as lively as Ghandruk is during the peak trekking seasons.

After all my previous times in Ghandruk, I had always taken the bus to Pokhara, so this time around I decided to walk down to Nayapul. For the first hour the trail was fun, following the stone steps down to the village of Syauli Bazar. But after Syauli Bazar the trail met the road, and for rest of the time, until I reached Nayapul, I had to walk along the road. This was boring at times, but as it was my first time on this route I still enjoyed the trip. Upon reaching Nayapul, I took a bus to Pokhara and headed home. 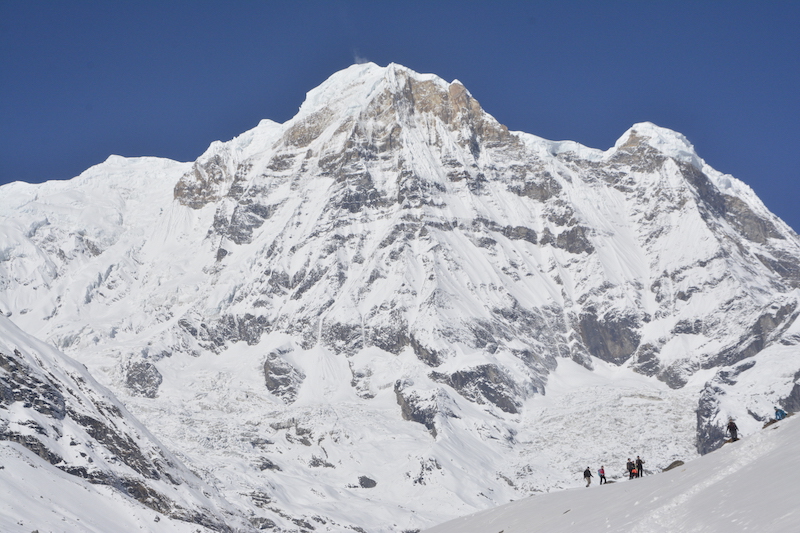