“Let’s Google the destination”, a friend said. “Let’s hit a desolated destination this time.”
Two weeks later…
Itinerary, prepared. Gears-list, checked. Backpack ready.
Having some whimsical inclinations towards adventure that mountains fuel, on September 2017, we marked at valley clustered far away in north -eastern Nepal, the Rolwaling Valley. This lonely high valley lying on Tibetan frontier is called as “The Grave” by native Sherpas due to its setting between steep ice-giants.
Before we left Ktown, it was muggy, buzzy, flashy and dusty. At the day end after leaving tarmacked road, we were on our own; dropped standing in the middle of sparse settlement, people we didn’t know and breeze characterized by uncustomary icy chill. The place was “Chet-Chet”. 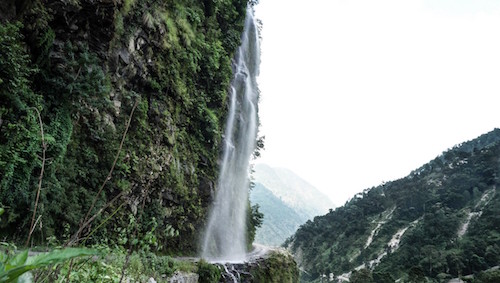 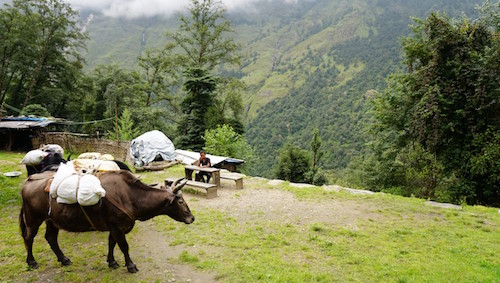 We crossed gurgling Tamakoshi in dusk hour, following steep steps to “Simigaon”. It felt like I was leaving behind what I carried in thoughts from Ktown- the wearisome ones, as we moved forward. Our head torch lasering at snake and jackal induced thrill at 8 pm in a foreign land. It was only after walking two and half hours that we found settlement. We were welcomed with tea, boiled potato, dalle khursani and warm hospitality— all for free! Landscapes enriched with sun-rays fueled us next morning. After quick breakfast, we footslogged closer towards the mountains that were calling us. 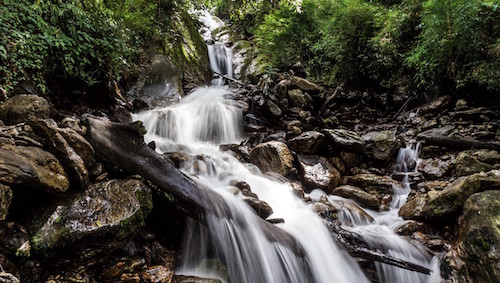 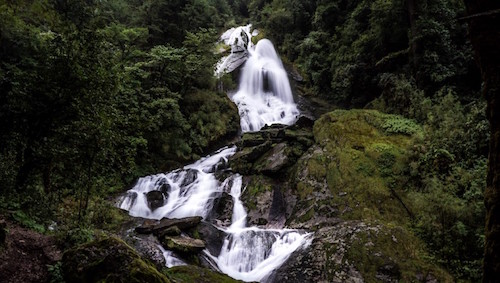 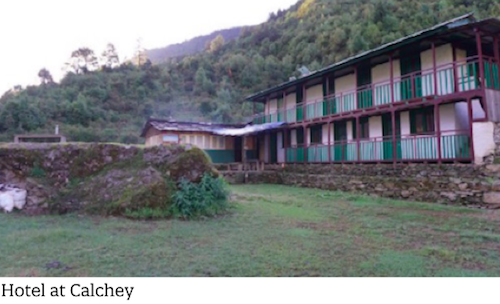 On the hilltop, through jungle rich with big-juicy-brownish leeches, rested “Calchey ”, the destination for the day with single hotel. Calchey offered glorious view of Mt. Gaurishankar’s cap, like a triangular piece of cake. The morning coffee and pancakes along with the view from here fueled us for the day.

Nature was unraveling herself unhurriedly. But we were excited to explore, without much delay at the same stop. We walked alongside milky river, wild waterfalls and dense jungle with leeches as travel companion. We had a distant glimpse of red panda, saw monkeys swinging hither and thither, birds we’d never seen before, and no human traces for next 7 hours. Here, just below Gaurishankar, we paused for the day at “Beding” village.

We easily managed to get into a nice warm lodge. There are few lodges and home stays, which as per the locals, suffice for the visitors even in the season, and unlike other sought-after commercial destinations, the place is markedly less swarmed almost throughout the year. 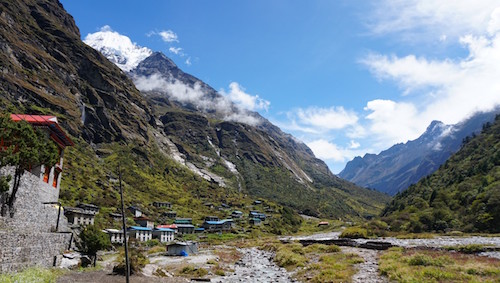 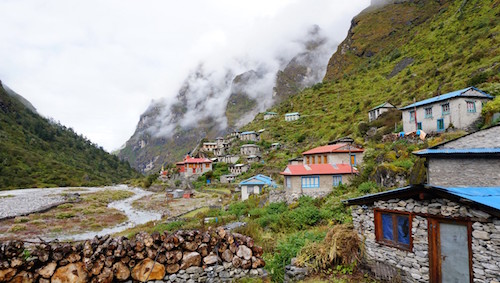 On the way to Na from Beding

Squeezed closely between massifs, this small valley, Na,relishes upon waterfalls; panoramic view of glistening mountains playing hide and seek with the clouds; Tsho Rolpa gliding down incessantly; musical jangling of yak bells and stone houses. Na is the last village along Rolwaling valley, and the most scenic one! 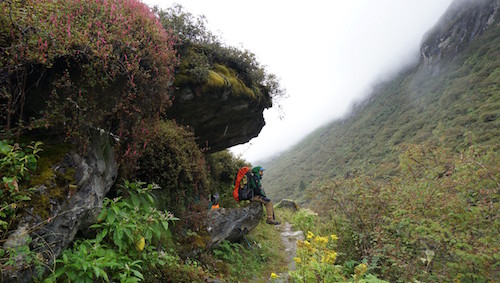 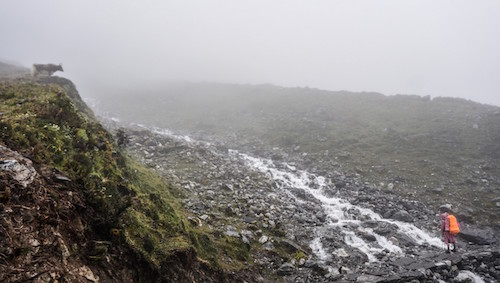 On the way to Tsho Rolpa

At “Na”, especially, did we observe different way of life. We noticed that the people we interacted with weren’t like folks back in town. They looked relaxed. Simple. Every eyes meeting ours looked welcoming, as if they want to speak to us.
Mostly, elderly people dwelled at the village. All kids were down to more facilitated areas for schooling, youngsters on expeditions or somewhere high up in the mountains, other remaining handfuls were busy all day long meandering trails down from Tsho Rolpa. As the place observes extremely cold winters, Na dwellers mentioned that they move down to Beding, which has lesser snow and is slightly warmer. However, if they spot tourists flow, they still stay at Na, to provide warm stay for them. 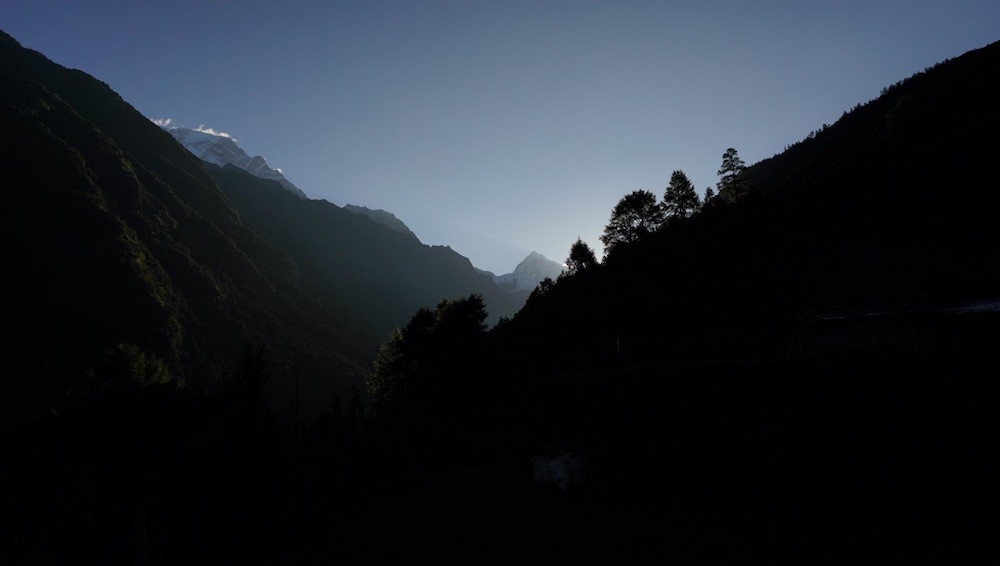 Ascending around 1.5 hours from Na, we reached Tsho Rolpa (4580m/15,030 ft)?—?one of the biggest glacial lakes in Nepal and the major attraction of the region. Over the last 50 years the lake has been a threat to villages down, due to its burst through unstable dam. On the way to the lake, we found several early warning systems installed, defunct due to lack of maintenance! While we were there, they were ploughing out the rocky hills (manually, without modern machinery) to make a trail, starting from Tsho Rolpa. 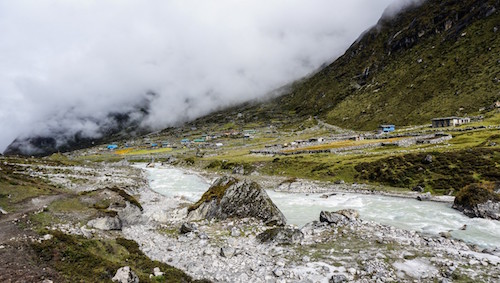 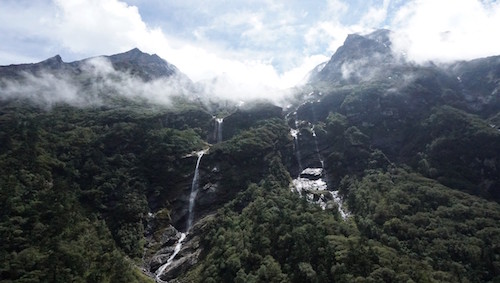 Tsho Rolpa lies in holy quietude. So calm. There are no tea-houses; the weather is unpredictable and it started to drizzle. We took a cover beneath a giant rock. Almost half of this milky lake’s periphery suffers with constant landslides, major and minor; we walked alongside the steadier side. 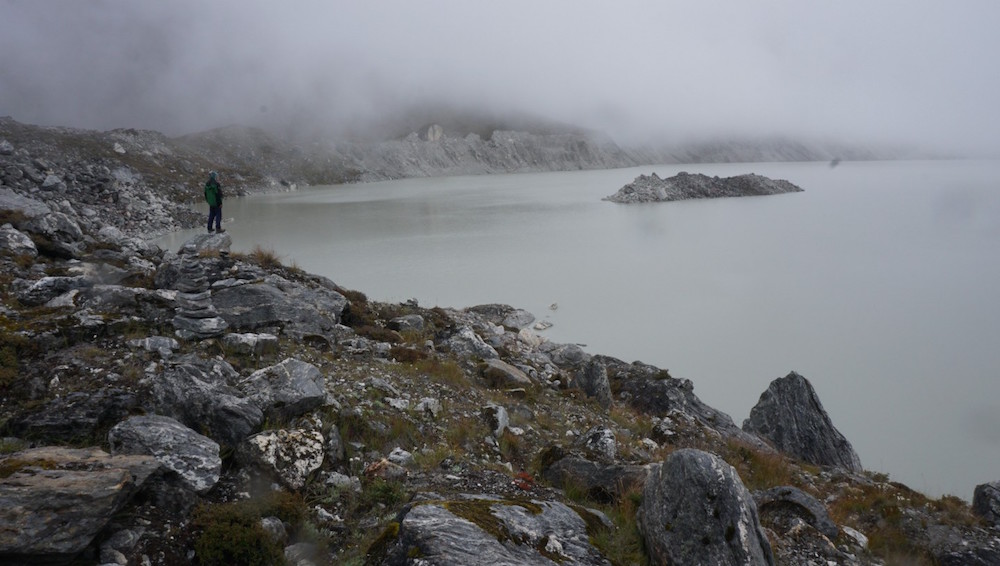 After Na, we had to sensibly look for falling rock pieces while walking, making sure that we don’t run?—?rather escape the rocks from striking you. And the locals say this has been the way it is. The trail is not distinct, one reason being the landslides that keeps rubbling it out.

We lost our way to Dudh Kunda- another sacred destination of the region. It was completely foggy, nobody around to ask to, no trace of trails and the only thing we could rely upon was stack of stones as a mark of direction. But we were out of that only mark after 2 hours of walk; somehow we made it. We decided to take a guide to our next destination. Due to bad weather that followed, we could not cross Tashi Lapcha Pass, which had been our ultimate destination of the trek, but we were already excited for our next destination. There are numerous options of peaks and mountains to climb from this region, all majestic in its own different ways. Returning from Tarkading Glacier, we choose to scale yet another least visited peak- the “Yalung Ri” Peak (5630m). 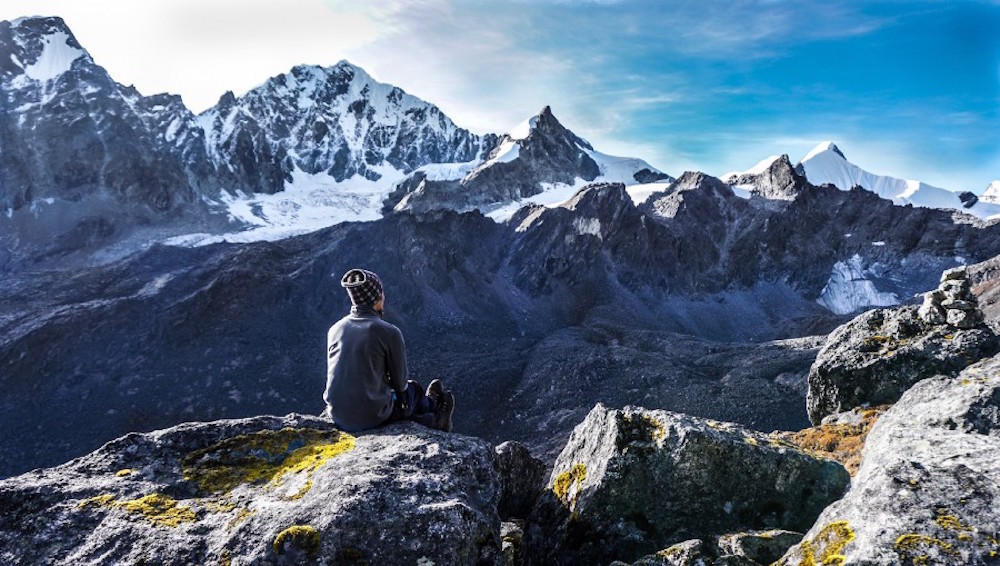 Mountains have so much to offer besides visual feasts. At our stay in high camp, we fetched pristine water flowing right from the base for tea and noodles. It would be an injustice not to admire nature again and again –mountains, glaciers and everything looked too picturesque to describe in petite words! 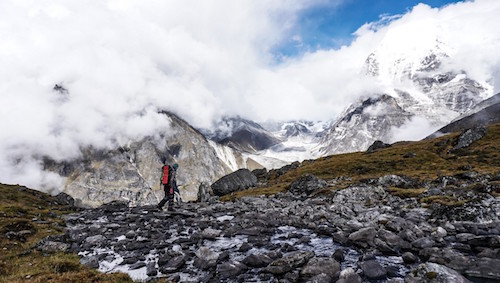 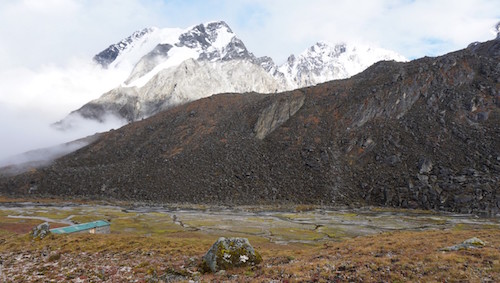 Climbing the peak was arduous with slippery upright rocks. We had a great time while rope climbing. While our guide was really quick in mounting up and ice screwing, he had to wait for us to climb in peril of falling rocks.

The mountains looked different here, they were sharp and pointed.On a clear day, one can see far-stretched Dolakha from the peak, including other mountains, as well as “Panch Pokhari”. 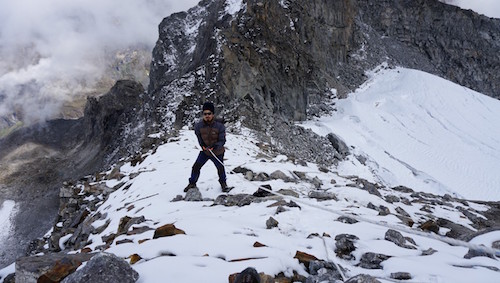 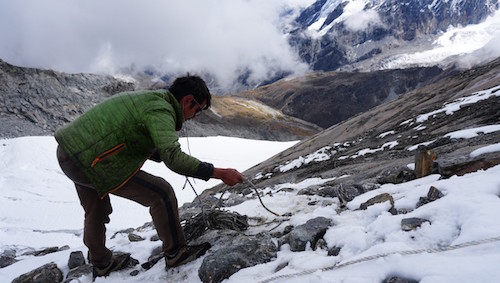 This region could especially be one of the preferences for those loving seclusion. The route was not commercialized until we strode there, houses in Rolwaling are solar lit, mobile network is not accessible after Beding and the whole region is least populous. Pulling out leeches from our head and heels, walking in rain despite panchos(raincoat) refusing to protect us, forcing against over 15 kgs backpack weighing us down with the straps scratching our waists, walking around 7–8 hours per day (on an average) in a sweat-drenched t-shirts, casting ourselves adrift when we found no soul to ask direction; and every other striving that took us afar up to 5630m is but momentous. Wait ! Did it sound like this destination is only for tougher ones?

While we were returning, we met an elderly Japanese couple heading towards Tsho Rolpa- overwhelmed by the sight of scenery . Another Swiss guy who was acclimatizing at Beding on his solo trek here,- “Rolwaling is extraordinarily different; completely safe and peaceful; beautiful throughout the route,great people, and the experience has been amazingly different than the other destinations in Nepal.” We were told by a local that a french guy has been trekking Rolwaling with his family every year since 2 years now, and he also donated to build a porters’ lodge at Glacier Camp. To sum up, the experience has been pleasantly memorable and the hard climb have been rewarding indeed!

Major reasons behind choosing this trail:
This is one of the least trekked destinations in Nepal.
Yeti, whose emergence is closely entailed to this region in Nepali Folklore, sounded inviting. 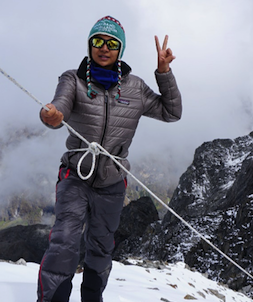 Raksha Roy is a contributing blogger at UpEverest. She is an IT professional, embracing writing and photography as her hobby. As an adventure seeker, her spirit to travel around takes her to the places that turns her into a tale-teller. Nepal has forever been an amazing destination for all, and Raksha’s travel diary intends to simplify traveler’s journey to her country through her experiences.