Mountains and Peaks in the Everest Region

Here we have a brief description of some of the mountains and peaks that surround Mount Everest. But first, ever wonder what the difference is between a mountain and a peak? A mountain is the whole, elevated landmass, and is somewhat separate from other elevated masses. Mountains are significantly higher in elevation and rise steeply from sea level. A mountain can stand alone or be part of a compact group of mountains, called a massif. Mount Everest is part of a massif together with Lhotse and Nuptse. A peak is a high point, is often pointy in shape. A mountain can have several peaks, but the highest point of the mountain - the very top - is called the summit. That’s why you have to climb to the very top to summit Mount Everest and earn the title of summiteer of Everest.

Check out the EBC Base Camp Trek Video

Next to Mount Everest stands Lhotse, the fourth highest mountain in the world at 8,516 meters. Located in Sagamartha National Park, Lhotse and another mountain called Nuptse are connected to Mount Everest and form the group of mountains called the Everest massif. The name Lhotse comes from the Tibetan words lho, meaning south, and tse, meaning peak - hence the name “South Peak”. 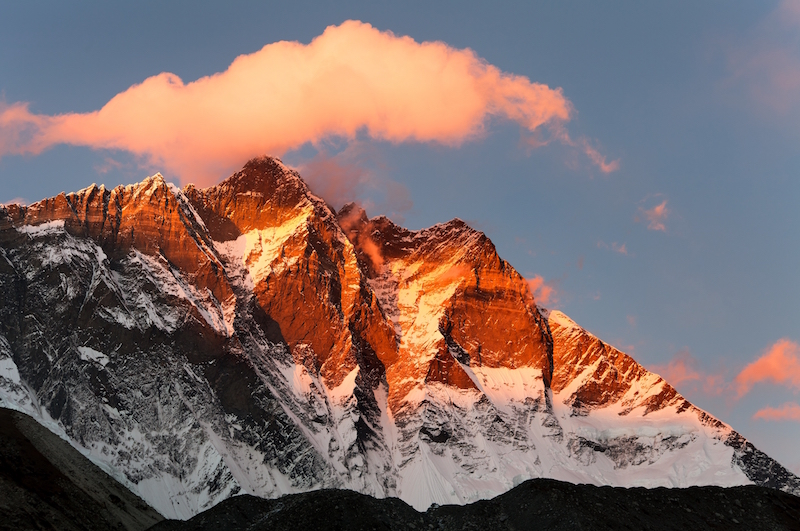 “South Peak” perfectly describes Lhotse and how it is connected to Mount Everest’s southern side by a narrow ridge known as the South Col that rises to about 7,906 meters. The final camp climbers use to summit Mount Everest, Camp IV, is located on the South Col between the two mountains. Lhotse’s summit is only about 610 meters higher than Camp IV. If it were only 500 meters higher than Camp IV (110 meters lower than its actual height), Lhotse would be considered part of Mount Everest instead of its own mountain. Topographic prominence is the vertical distance between the highest point on a peak and the lowest contour line (lines indicating altitude on a map) that encircles it but does not contain a higher peak within it. Lhotse’s topographic prominence difference is therefore the difference in height between Lhotse’s summit and the South Col where Camp IV sits. With only 110 extra meters of elevation over the 500-meter minimum, Lhotse has the smallest topographic prominence of all the 8,000-meter mountains in the world.

In 1955, an international expedition led by Swiss-American Mountaineer Norman Dyhrenfurth made the first attempt to summit Lhotse, which proved unsuccessful. A year later in 1956, Lhotse was successfully summited by the Swiss Mount Everest/Lhotse Expedition team headed by Ernst Reiss and Fritz Luchsinger. Lhotse’s lower peaks were later summited. In 1970, Sepp Mayerl and Rolf Walter of Austria first ascended Lhotse Shar, the lowest peak and a much more dangerous and difficult climb. Lhotse middle remained unclimbed until 2001, when a Russian team, headed by Eugeny Vinogradsky, Sergei Timofeev, Alexei Bolotov and Petr Kuznetsov successfully climbed the summit.

Reaching an elevation of 7,861 meters, Mount Nuptse is located in Sagamartha National Park. Its name is derived from the Tibetan words nup, which means west, and tse, which means peak.

“West Peak” describes Nuptse well: a unique, jagged ridge that looks like a massive wall guarding Everest from the west is the mountain’s defining feature. Nuptse is a popular commercial mountaineering destination due to its proximity to Everest and easy access.

The long east-west ridge of Nuptse has seven peaks:

A British expedition first summited Nuptse on May 16, 1961. The team climbed from the north-ridge Scott-route and included Dennis Davis, Sherpa Tashi and Sir Chris Bonington.

Reaching 8,485 meters in elevation, Mount Makalu is the fifth highest mountain in the world. Makalu is located about 20 kilometers southeast from Mount Everest in Makalu Barun National Park.

The name Makalu is derived from the Sanskrit word maha-kala, meaning the big black, which refers to the mountain’s blackish color. Makalu’s unique four-sided pyramid structure makes it a difficult climb and leaves very little space on top of the summit. 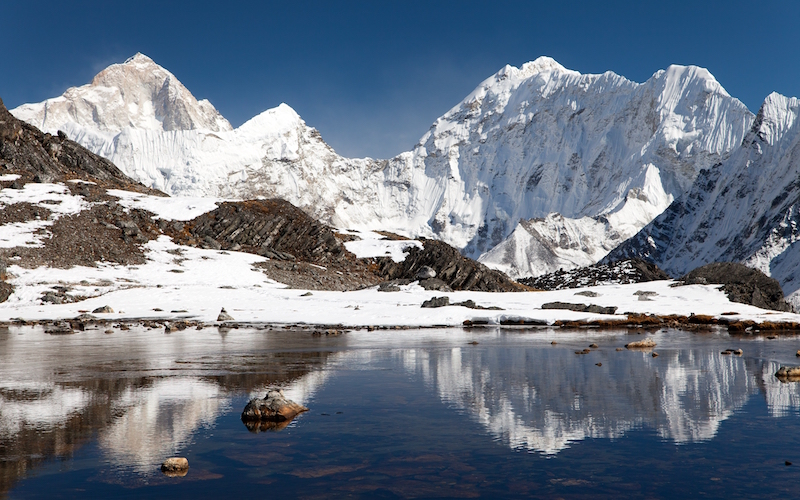 Makalu has three peaks in total:

In 1954, three separate expeditions - an American team, a British team and a French team - made the first attempts to summit Makalu via three different routes. All were unsuccessful. It wasn’t until May 15, 1955 that Makalu was first summited by Jan Cusi and Leonel Terrey via the mountain’s North Col route.

Standing at 8,201 meters, Mount Cho Oyu is the sixth highest mountain in the world. Cho Oyu is located in Sagamartha National Park about 20 kilometers west of Everest, making it the westernmost major peak of the Khumbu region. Cho Oyu’s name is thought to be derived from the Tibetan words chomo meaning goddess and yu, meaning turquoise – hence “turquoise goddess.” Some also believe Cho Oyu to translate to “Mighty Head” or “God’s Head.” 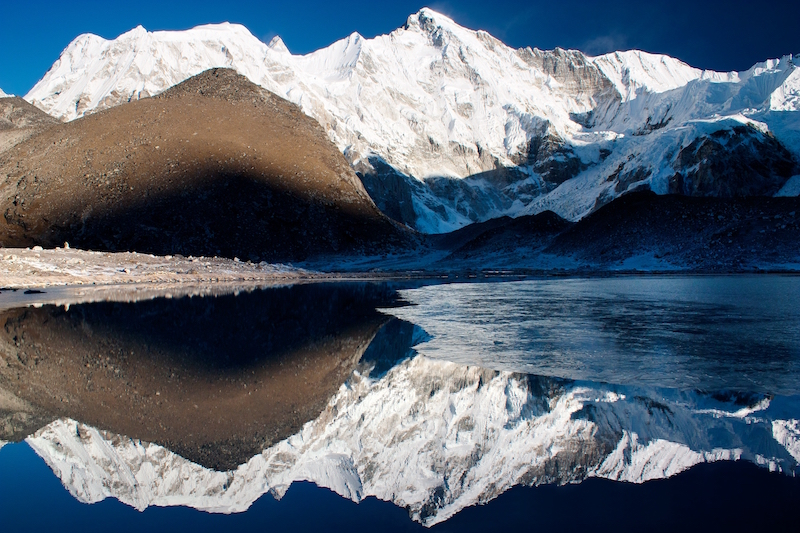 A British expedition that included Sir Edmund Hillary first attempted to climb Cho Oyu in 1952, but was unsuccessful. Cho Oyu was later summited in 1954 by a small Austrian expedition led by Herbert Tichy without using supplementary oxygen.

At 6,812 meters, Mount Ama Dablam stands tall above the Dudh Koshi river valley in Sagamartha National Park, close to Mount Everest. Though not as tall as other neighboring peaks, Ama Dablam is one of the most iconic mountains of the Khumbu region.

The name Ama Dablam is derived from two words: “ama,” meaning mother, and “dablam,” meaning pendant. Together the name Ama Dablam means mother’s necklace, and refers to a hanging glacier that resembles a pendent and the two long ridges on each side of the summit that resemble the arms of a mother protecting her child. This magnificent mountain is one of the most notable features of the Everest Base Camp trek, and it can be seen from many points on the popular Everest Base Camp trekking trail and from the base camp itself. 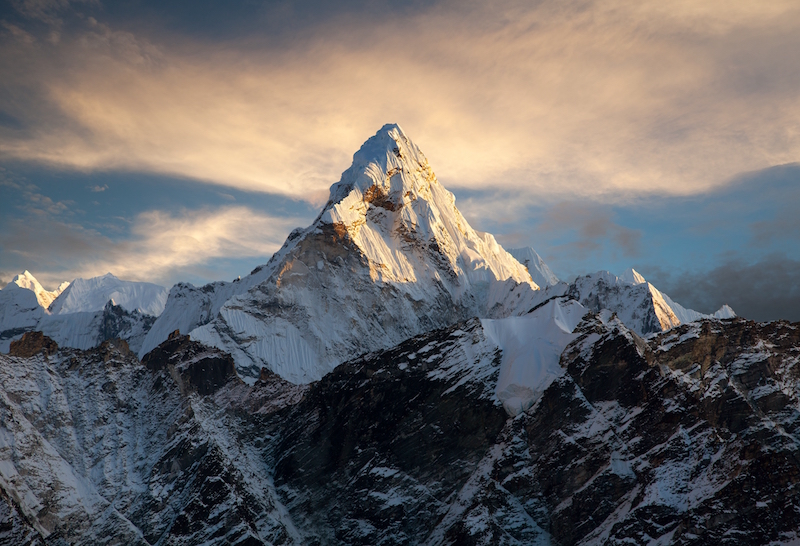 On March 13, 1961, the Silver Hut Scientific Expedition made the first successful summit of Ama Dablam. The team was led by Sir Edmund Hillary, who later became the first to reach the summit of Everest alongside Tenzing Norgay, and also included Mike Gill and Wally Romanes from New Zealand, American climber Barry Bishop, and Mike Ward from Great Britain.

There are 27 peaks in Nepal classified as “trekking” peaks by the Nepal Mountaineering Association (NMA). To earn trekking peak status, the peak must be accessible and close to popular trekking areas and range from 5,800 to about 6,500 meters in elevation. Many trekking peaks are less technical than “expedition” peaks, like Makalu or Lhotse, and don’t require as much time or skills from climbers. Because of their accessibility and comparative ease, certain trekking peaks are a perfect introduction to Himalayan mountaineering. Some can even be climbed as part of an extended trekking holiday. Below are some of the most popular trekking peaks you can climb in Nepal, all located in the Khumbu region. 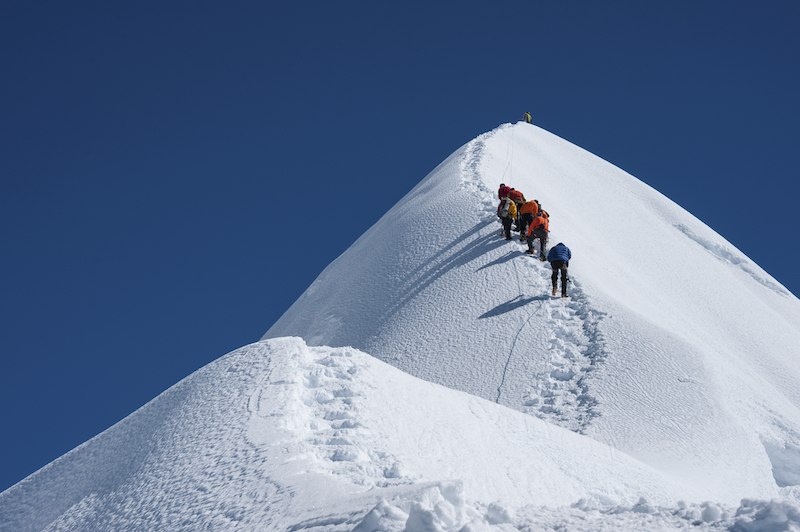 Renowned British climber Eric Shipton named Island peak in 1951, describing the peak as an “island in a sea of ice”. It was later renamed Imja Tse in 1983, but Island Peak remains the more popular of the two names. The summit of Island Peak offers a clear view of Nuptse, Lhotse Shar and Ama Dablam. Island peak is currently one of the most popular - and the most summited - peak in the Himalaya.

Island Peak was first climbed and summited in 1953 by a British team in preparation for their expedition to climb Everest. Tenzing Norgay, who later became the first to reach the summit of Everest alongside Sir Edmund Hillary, was part of the team that first summited.

At 6,470 meters, Mera Peak is one of the highest trekking peaks in Nepal. Mera Peak is located in the Hinku valley of the Everest region, in Makalu-Barun National Park. 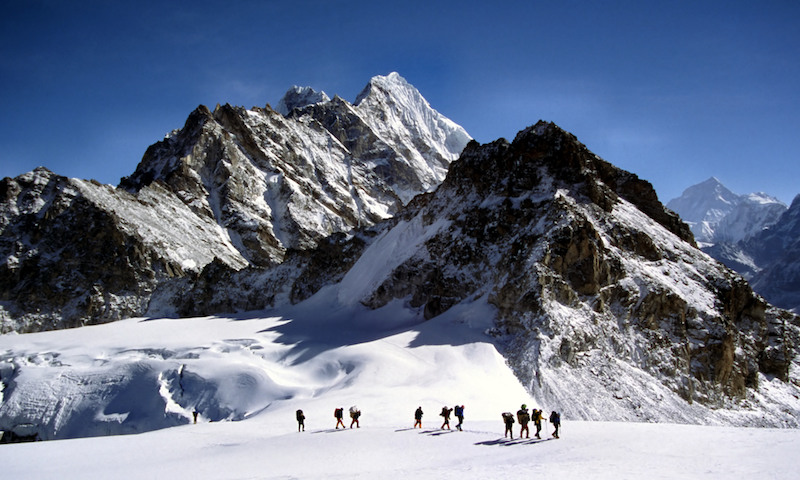 Although its name contains the word peak, Mera Peak is in fact a mountain. The summit of Mera Peak offers a spectacular view of five of Nepal’s over 8,000-meter mountains: Everest, Lhotse, Cho Oyu, Makalu, and Kanchanjunga. Because of its relative ease, Mera Peak is an immensely popular trekking peak for commercial climbers.

Lobuche, also known as Lobuje, stands at 6,119 meters. This peak is located in Sagamartha National Park in the Khumbu region of Nepal, close to the Khumbu glacier and the village of Lobuche. Lobuche has a triangular shape with dark colored east face. The peak of Lobuche is part a mountain that contains another much more difficult trekking peak, called Lobuche West (6,145 meters). A sharp ridge pides the two peaks of the mountain. 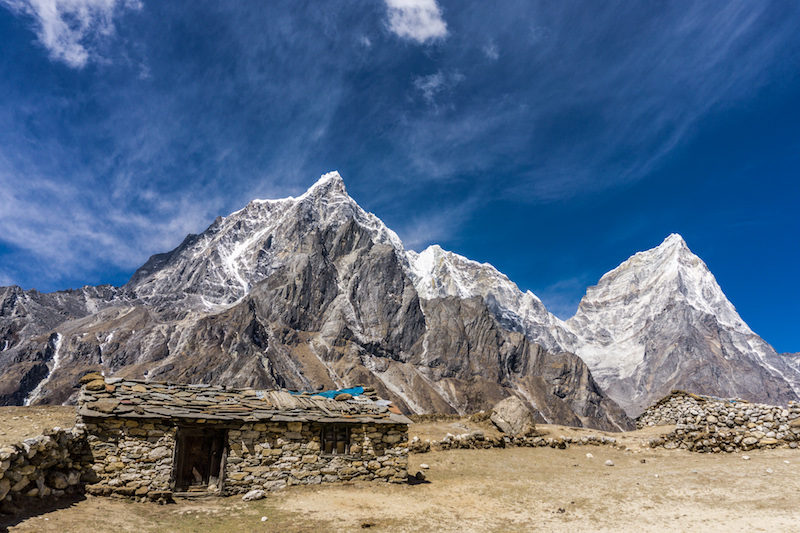 On April 25, 1984, Laurence Nielson and Sherpa Ang Gyalzen became the first to summit Lobuche. Today, Lobuche has become an increasingly popular trekking peak for commercial climbers, namely because it is easily accessible from the village of Lobuche along the Everest Base Camp trekking route.

My First Time Trek to Everest Base Camp