Annapurna region is the center of one of the greatest Himalayan travel experiences. It blends snow-clad mountains soaring high up above the clouds and thousands of years of culture, tradition, languages and landscape diversity. From hillocks, hills, the deepest gorge in the world, waterfalls, and glaciers to high elevation lakes, high mountains and an extremely hospitable environment, the trekking experience of the region is unrivalled. Bill Tilman in 1949 was the first person to trek in the foothills of Annapurna, opening of the trekking industry in the region. A year later, Maurice Herzog became the first person to climb a mountain over 8000 meters, by climbing the Annapurna I. Since then the Annapurna region has become a renowned tourist destination of Nepal. Receiving over 100,000 tourist every year, trekking in Annapurna region is considered to be one of the most classic treks in the world. The whole region of Annapurna, including the Annapurna massif falls under the Annapurna Conservation Area. This conservation area is the largest conservation area in Nepal, and is home to the elusive Snow Leopard and Red Panda, as well as blue sheep - which are very common along the Annapurna circuit trails. The green and lush pine and rhododendron forests harbor a vast diversity of avian faunas. Himalayan griffon, the national birds of Nepal, can be seen soaring above the skies surrounding the Annapurna massif. 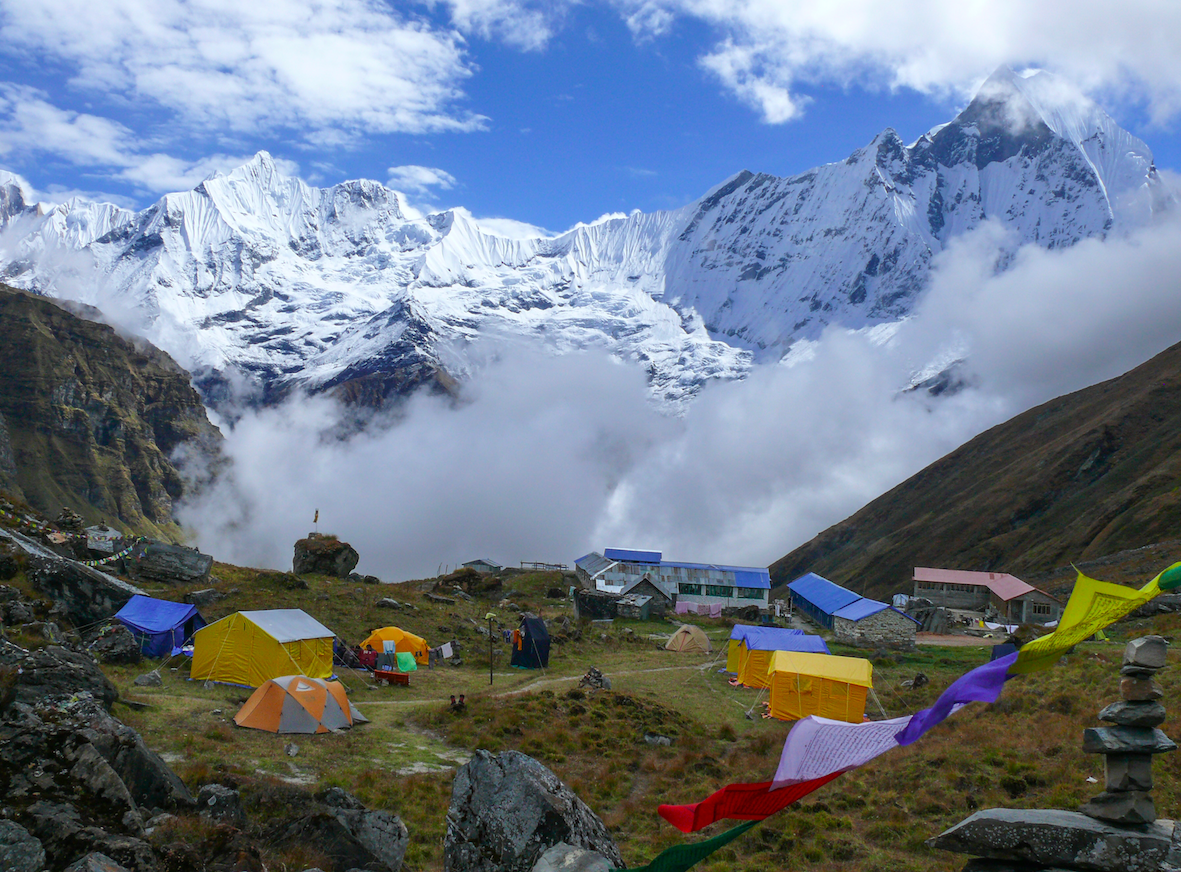 The northern part of the Annapurna region is a trans-himalayan semi-arid zone which receives minimal rain, even during the monsoon and would be open at all seasons. The only problem in trekking during the monsoon season (June-August) is the occasional flooding and landslides that can occur on the way. Apart from that, the trekking routes won’t be much affected. Winter is an extremely difficult season on the highest trails due to the snows that block high passes and areas. The best season for trekking is before the start of winter (September- November). Spring season, March to May, is also considered one of the best seasons to trek around the Annapurna area.

Trekking routes in the Annapurna region have to be some of the most developed of all the trekking routes in Nepal. All the routes within the region have ample hotels and lodges. There are plenty to choose from, some even have attached bathrooms with western style toilets and Wi-Fi facilities. Apart from the peak trekking season in the fall, getting a room in one of those routes won’t be much of a problem. The routes are comparatively cheaper than other trekking routes but the price goes up as the trail goes higher in elevation.

There are plenty of health posts and safe water drinking stations throughout the routes. There are at least 3 governmental hospitals on the Annapurna circuit trekking trails at Besi-Sahar, Chame and Jomsom. In case of emergencies, there are regular phone networks in most of the areas and those areas without phone networks have access to Satellite phones.

Apart from being rich naturally and geologically, the region is also incredibly rich culturally. Though Gurung communities inhabit the majority of the Annapurna region, patches of other communities all over enrich the ethnic diversity of the region. Yarthung, the fall horse festival, is one of the most renowned festivals celebrated in Manang, along with Lhosars, or Tibetan New Year.

The Gateway to Annapurna

There are various trekking routes within the Annapurna region and most of them start from Pokhara, except the Annapurna circuit which starts at Beshisahar, Lamjung. Buses (Microbuses) to Pokhara and Besi-Shara are easily accessible from Kathmandu. There are daily flights to Pokhara from Kathmandu, as well as several flights from Pokhara to Jomsom for other trekking routes.

Permits and Fees in Annapurna Region:

Where to get the permit for Annapurna Base camp trekking

Permits and Fees for Annapurna Region