Trekking in the Dolpo region

From turquoise-blue waters set amidst high mountains to ancient Buddhist monasteries, Dolpo has incredible things to offer the intrepid traveler. Located in northwestern Nepal, just west of the district of Mustang where the Annapurna region lies, Dolpo also borders Tibet to the north. The region has been made famous as a sort of Shangri-La in Peter Mathiessen’s famous book The Snow Leopard, as he followed biologist George Schaller through the region studying animals. Anthropologists like David Snellgrove have studied in and written about Dolpo, and Eric Valli even produced a famous Oscar-nominated documentary called Caravan about Dolpo. Still, Dolpo has remained largely undeveloped and remote, a lesser-known destination for tourists in Nepal. The district of Dolpo is divided into two regions: Upper Dolpo and Lower Dolpo. Upper Dolpo encompasses a desert-like heavily Tibetan-Buddhist region that remains isolated, while Lower Dolpo contains a mix of Buddhist and Hindu villages, dense forests, and high mountains. Though trekking in Upper and Lower Dolpo is wild, remote and sometimes challenging, it is extremely rewarding. 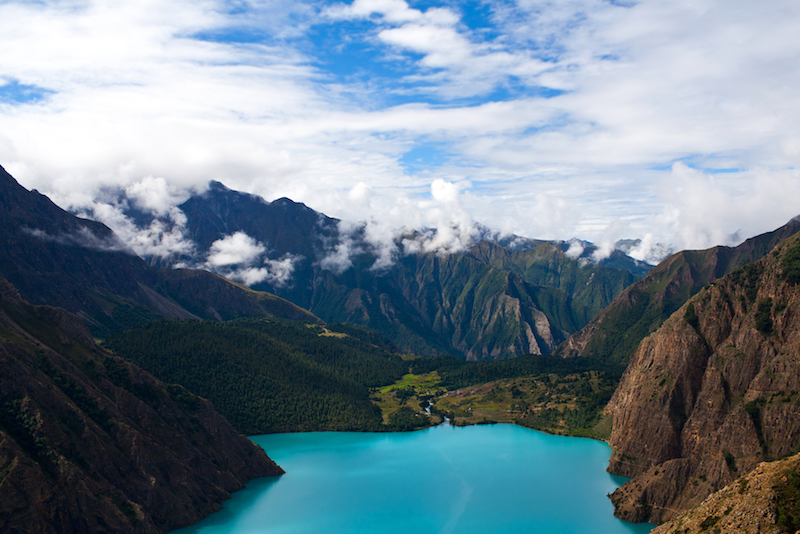 Upper Dolpo: The popular trekking seasons - fall (October/early November) and spring (April/May) – are good times to trek in Upper Dolpo. Like Upper Mustang, Upper Dolpo is one of the areas where monsoon is an ideal time to go because it stays largely dry as it sits in the “rain shadow” behind the mountains in Mustang to the west and Jumla to the south. Monsoon rains can make it difficult to get to Upper Dolpo, but once there the trekking is excellent in the summer months.

Because Dolpo has seen fewer trekkers and tourists in the past than other parts of Nepal, only a few villages have lodges and teahouses. These are mainly concentrated in Juphal, Beni, along the way to/from Phoksundo and some in parts of Upper Dolpo. Guesthouses in Dolpo are comfortable but much more basic than their counterparts in the Annapurna and Everest regions. As a result, almost any trek (except to/from Lake Phoksundo) will be a camping trek. While this can add to the challenge of a trek, it also allows for a lot more freedom in terms of choosing where to stay along the trek.

There are few if any health checkposts in Dolpo, as it is remote and rugged. There is some cell phone coverage in various parts of the district, but it is not always reliable. In case of emergencies, helicopters have rescued travelers with insurance coverage

The Gateway to Dolpo

There are several variations and trekking loops in Dolpo, some crossing into the neighboring districts of Mustang to the east or Jumla to the south. Generally, the starting point for most treks in Dolpo are Dunai and Juphal (in Dolpo district), Beni (in Mustang district) and Jumla (in Jumla district). Juphal and Jumla both have airports.